'Backing Up' the Past, Present, & Future: HHM's New "Archive Drive"

What are the chances of getting 50 or so relatives together for a portrait? The above image is part of a collection of copy photos sent to the museum from a DeLaporte family descendant in Arkansas, and this is also a perfect example of the value in archiving old documents. In fact, this is one of the most detailed descriptions of a family photo in the collection, as proven below: 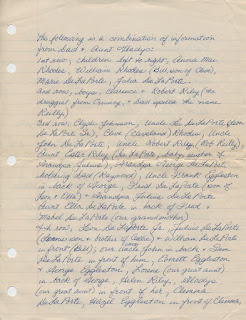 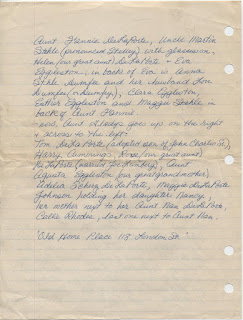 Yes, that is a list of every person - with notations - in the image.
The package of photos was intriguing enough to warrant a separate story on pre-modern 'selfies' in the coming March issue of Hannibal Magazine. However, this raises the question of how the current and past couple of generations have been preserving their memories. Are we in danger of losing large chunks of information about our towns, our everyday lives, that would be historically important in the decades to come? The methods used to document the world around us have become so technologically advanced, we don't think twice about a quick phone snapshot to post on Facebook, yet the modern flooding of visual media in our lives may translate into letting those important bits of life accidentally go into the recycling bin along with a slew of impulse shots that are only useful in the moment they are taken.

For historians, the availability of recording virtually anything in one's personal space at any time does not mean that this information is stable. Once a phone or laptop breaks, the digital files may be inaccessible. Moreover, our society's increasingly digital lifestyle de-emphasizes the importance of having a backup, as if the 'cloud' servers are infallible. Without meaning to cause paranoia, here are some tips: 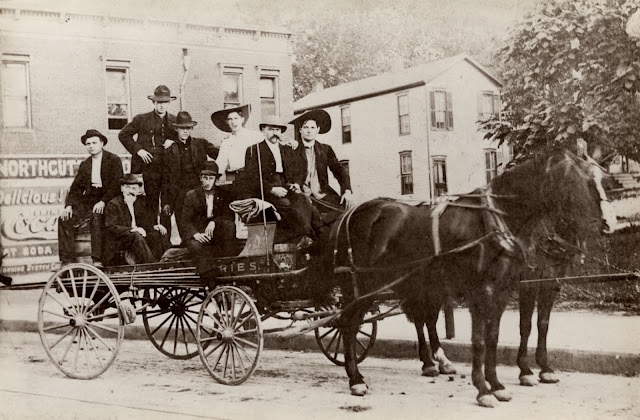 Images like the one above (c. early-mid teens) are valuable to researchers, even without details on who is in the photo. The delivery wagon, the background advertising (some of which is still visible heading west on Market in the 'Wedge' toward the local Pick-A-Dilly), the fashions of the time...are all of value to a historian. Even as a scan of a scanned reprint from about fifteen years ago, enough detail still exists to pull information close-up.

* Back up valuable physical documents and photos with 300dpi or greater scans, and try to use an EXTERNAL solid-state hard drive for the most valuable digital files. Files can be pulled more easily from an 'SSD' when it breaks, thanks to the way it is build; besides, these drives are usually exponentially faster than their regular hard drive counterparts.

** Check the digital folders/hard drive once in a while, especially if it is not a drive that is often in use. Files can degrade, so it helps to have more than one 'hiding spot' for these folders, and to update and upgrade storage drives on a schedule. Digital technology can change quickly, and some files - if not reformatted or resaved once in a long while - won't be readable. Remember the ZIP Drive (R.I.P.)

*** Many photo viewing programs allow users to place tags or other data as part of the image files; that is the proverbial way to 'write' on the virtual backs of the photos. If that is too unwieldy, make a quick Word file to list the images in the most important folders, and to give details of who, what, where, when.

****Make photo inkjet copies of the most valuable docs/images, then store those copies in a dry place with a temperature between 65 and 75 degrees, if possible. Humidity can make the papers stick to each other, ruining the whole process.

We at the museum recognize that there is a risk that important information about the community may be slipping away from us, mainly because it is not being continually archived - that is why we are initiating an "Archive Drive." It is an attempt to begin a permanent oral archive of Hannibalians and their experiences, as well as a push to digitally archive documents and photos that would be helpful to present and future historians. There is much more to come, and the first step is to come to an informational....

(Didn't mean to shout, we just needed it to be seen.) We would love to assemble a team of volunteer archivists in our bicentennial year. This is also open to people who may have ideas on leads, too. No expectations, just come to learn more and to preserve more of Hannibal's history.