Hanging on the Line

From time to time, we will be posting random finds or donations that provide a little bit of insight on the lives Hannibalians used to lead. This picture is part of a folder we received out of the blue from Karen Lucas (Thank you!) 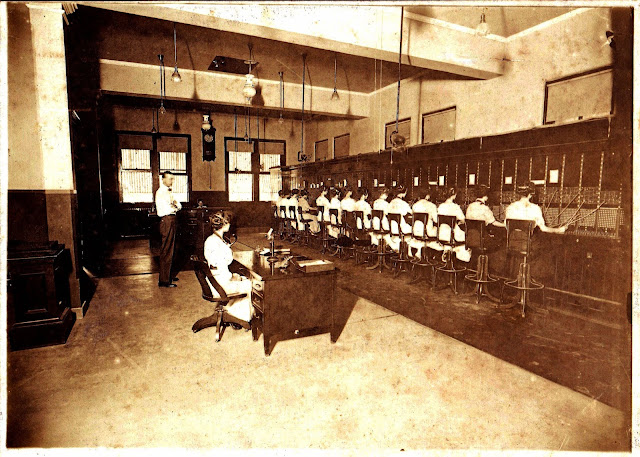 Welcome to the nerve center of the town's telephone system, circa 1913, at the Missouri & Kansas Telephone Company on 818 Broadway. According to the back of the photo, Ms. Lucas' maternal grandmother - Ada Mason - is the fourth operator from the left: 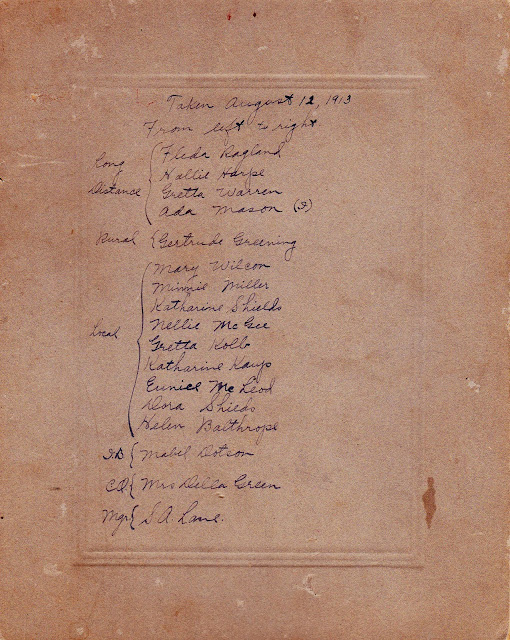 (Note the number of operators needed for the long-distance and local calls!)

For those too young to remember, switchboard operators were necessary to manually 'patch' a caller to the desired recipient. Not that telephones had become standard in every household; by 1913, a promotional pamphlet on the history of Hannibal's telephone system boasts of servicing over 2700 people (in a community of roughly 18,000!) The town can boast of being (technically) the first community in Missouri to have a telephone system, though it was in a virtual tie with St. Louis for the honor in 1879. At first, the system had a whopping 25 subscribers, with 3-5 subscribers assigned to share a given line, a practice still found in some rural areas of Missouri into the 1980s. By 1882, the list of patrons had grown: 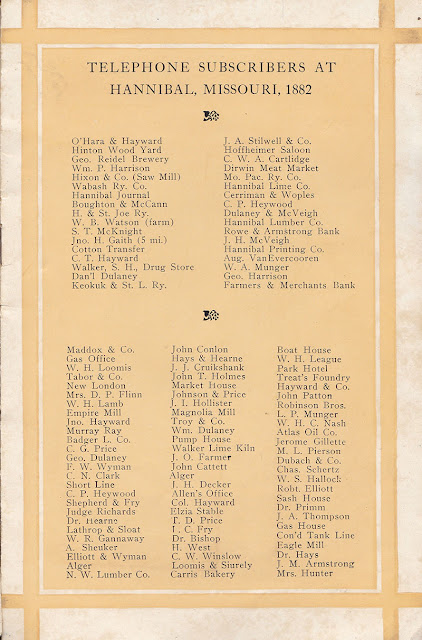 At the switchboard, the operator originally received an electronic signal that would ring a bell at the desk, while a flag-like structure would vibrate, instructing which line to pull. Next, the operator would reconnect the line with the number that was requested - the first phones did not have a rotary dial system, so handle cranks at the phone receiver were the signals used. Yes, it was a human-dependent system for years; incidentally, the first few phone lines were run through the town without poles, instead being connected across the tops of buildings.

By 1913, a job once assigned to boys had been largely occupied by women: a quick Google of the term "Telephone Girl" will show how ubiquitous a symbol the phone operator had become in American society, even becoming the topic of several films, a Broadway musical, and several other writings. This anonymous poem had made the rounds for a few years by the time it was typed on this stationary from Al S. Schorr's City Brewery: 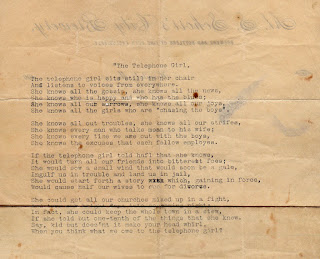 The Telephone Girl (original, in slightly different order than above:)

We are always looking for items and information to add to our digital archive; if you have a 'window into the past' you'd like to share, please contact us at info@hannibalhistorymuseum.com.