In light of the recent Best Picture Academy Award granted to the movie "Green Book," it would be easy to assume that what pianist Don Shirley (played by Oscar-winner Mahershala ) endured was mainly a certain kind of segregation confined to the south. As the Green Book demonstrates, it was a nationwide issue, partly borne out by the need to have such a publication in the first place. Victor Hugo Green, a New York City postman, compiled the listings in 1936 for the New York state area, but it quickly went national in scope and was eventually carried by Esso service stations until the publication ceased in 1966 - two years after the Civil Rights Act of 1964 was passed.

The book was more than a way to find establishments either owned by or welcoming to African-American travelers; it was a means of keeping safe on these trips. The guidebook's front caption says it all: "Carry your Green Book with you...you may need it..." Options for lodging and food were limited in segregated communities, and the guide did not reflect the other, more private and/or non-commercial networks that existed in communities - the equivalent of 'a friend of a friend' who had a spare couch. In addition to the segregated communities, a number of 'sundown towns' meant that a car trip had better be well-timed to avoid being caught driving through after sunset.

It would be overkill to put together a whole essay on the topic when there are so many resources online; one source allows the viewer to plan a road trip in 1947 or 1956 through any point in the US by using the Green Book (http://publicdomain.nypl.org/greenbook-map/)  Brian Foo of the New York Public Library had designed an interface on the website that also provides a 'heat map' to show the concentration of road stops throughout the country at the time. And yes, Hannibal is on the 1956 map: 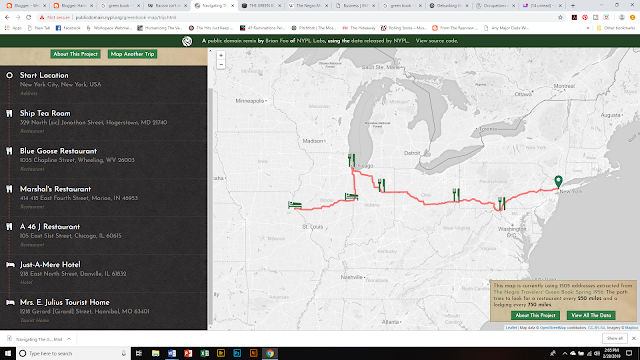 If you are now googling 1218 Girard Street, well...the two-block area on the edge of the Wedge neighborhood was razed to build the lot that now houses the Save-A-Lot and Family Dollar stores. As the route above shows, driving through the north of the US (or the west coast, for that matter) did not guarantee a trip without challenges and/or dangers.

The "Green Book" movie, criticized by some as being extremely well-made but too reliant on a 'white savior' to narrate the story of Jim Crow segregation, is a case where a fuller version behind the biographical script can be found through the words of the musicians themselves, as this Pitchfork article details wonderfully.

The Wikipedia entry for The Negro Motorist Green Book

Candacy Taylor's remarkable Green Book project, where she has documented over 9,600 locations that had been listed in various editions (also referred to here as 'The Overground Railroad.')


And of course, the website for Jim's Journey, which covers the history of African Americans in Hannibal throughout all its eras, and is a must-visit (through the special efforts of Executive Director Faye Dant): 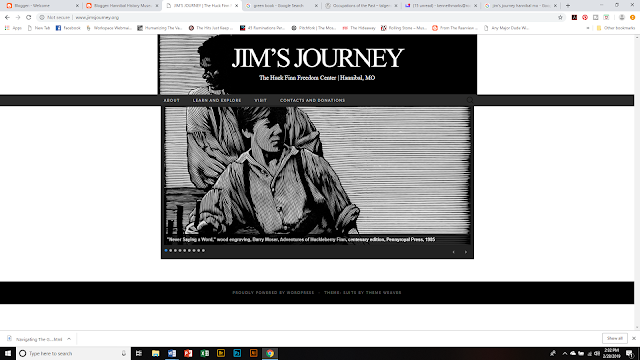